This post has a turn around facts holiday theme PDF that is free. I was looking at the left over plastic container from a holiday food item.  What could it be used for at school?  It is such a shame to toss so many of the kinds of serving containers we use at the holidays.

Then I remembered some Santa and penguin mini-erasers I had just bought, and had an idea for turn around facts. I thought it made a nice north and south pole scene, and turned around the math is the same, being the cumulative property of addition. Children might like manipulate this in a math center.

Maybe you don’t have such a tray on hand, actually, hopefully you don’t have to deal with such items. So I have prepared a printable PDF with turn around facts and a holiday theme. After children learn to subatize or conserve numbers for addition math problems, they can begin to figure out that the equals sign does not mean “the answer is on the right side.” Equals means the SAME AS, of course!

This activity will help children have the math sense to realize that the numbers to not have to be in a certain order to solve a problem. The pages have matching so that children can see which problems are actually the same. It has signs for the teachers to use to turn around and demonstrate with pictures how these math sentences work. 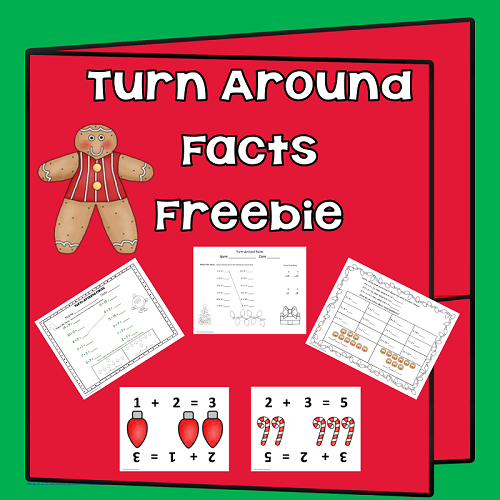 I hope this will be helpful to some classrooms or homeschools.