How to Think by Allan Jacobs Book Review

How to Think by Allan Jacobs Book Review

How to Think: A Survival Guide for a World at Odds was written by Allan Jacobs to help people feeling chaos from social media and anti-intellectualism in today’s world. I recently became interested in the Blogging for Books program and this title caught my eye. Thinking is needed in today’s world, and first teachers might consider this topic at a high level before introducing a unit about which news is real and which might be fake. The topics of alternative facts, social media arguing not based on fact, and emotional struggles with the avalanche of information are discussed in this text. How to deal with it all? Jacobs has several well-researched thoughts. I have to admit some of the book would require further study on my part and therefore it would be good for a book group to discuss.

The topic of thinking is near and dear to my heart as I taught an entire school of children thinking skills on a weekly basis. Teaching gifted and talented classes was half of my job with Wayzata Public Schools, and the other half was teaching every grade one through six class in the school thinking skills. Sometimes referred to as “Thinking Kills” or “Stinking Skills” by a few students, the challenge was to not only see children for a half or a full hour a week in a classroom setting, but also to assign grades to all of them. Quite the job! After five or six years the program was canceled, although the district retained the gifted and talented program. As a result, thinking about thinking always interests me. 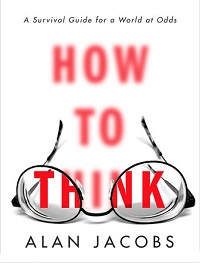 Jacobs tackles many common myths about how people think that we may take for granted without — well, thinking about them. He quotes several famous leaders who have written books in the field of thinking, and makes several insightful observations we can take to heart to help us deal with information and misinformation in today’s world. He cites books used in schools such as Lois Lowery’s The Giver. He quotes John Stuart Mill and C.S. Lewis. It was helpful that I had recently read Making Sense of the Bible by Adam Hamilton as some of the same questions were discussed in both books. Jacobs quotes T. S. Elliot as saying when we do not know something for sure, we tend to substitute emotions for knowledge. Teachers know this plays out in the classroom often.

He quotes Marilynne Robinson as saying we invest in not knowing some things in order to have the pleasure of sharing an attitude one knows is socially approved. Again, teachers notice this happening in the classroom as well. This might be harmless for children to keep friends at school, of course. Thinking is a science not an art and there is no set of directions to follow to produce reliable thought. Perhaps that is the problem with trying to teach an entire school of children to think? Ya think?

Jacobs argues there is no real thinking for yourself, as in when you hear people say, “She finally started thinking for herself!” He says it means instead of thinking like one group, the person has actually started thinking more like a different group. He says there is no thinking without the influence of other people. How do we react without hating or antagonizing “the other?” How do we think amid the chaos of the information age? How do we think when we get bits of information thrown at us constantly without time to research, reflect, and consider what is being said? Patience is one habit of thoughtful people Jacob states.

The book offers examples of what happens when people are given wait time. One of the vignettes in the book is about how Jacobs wanted to argue with a someone only to be told to give it five minutes. He shares examples of how thinking can change if a person has to wait a minute or two before talking. In the classroom, we give wait time (hopefully) to children who might need to process the information before answering a question. Offering wait time to children before answers are required fits in well with the information in this book. We can give ourselves thinking time before responding on Twitter and Facebook, and also in real life as one step forward. We can encourage students to do the same.

Another favorite author of mine is David Brooks, and I was happy to see his positive review.

“Absolutely splendid . . . Jacobs’s emphasis on the relational nature of thinking is essential for understanding why there is so much bad thinking in political life right now . . . Back when they wrote the book of Proverbs it was said, ‘By long forbearing is a prince persuaded, and a soft tongue breaketh the bone.’ These days, a soft tongue doesn’t get you very far, but someday it might again.”
—David Brooks, the New York Times

Alan Jacobs is Distinguished Professor of the Humanities in the Honors Program of Baylor University. Before that, he taught for many years at Wheaton College in Illinois. He writes for publications like The Atlantic, Harper’s, First Things, Books & Culture, the Christian Century, and the Wall Street Journal, and maintains a blog at the New Atlantis.

ABOUT HOW TO THINK

How to Think is a contrarian treatise on why we’re not as good at thinking as we assume—but how recovering this lost art can rescue our inner lives from the chaos of modern life.

As a celebrated cultural critic and a writer for national publications like The Atlantic and Harper’s, Alan Jacobs has spent his adult life belonging to communities that often clash in America’s culture wars. And in his years of confronting the big issues that divide us—political, social, religious—Jacobs has learned that many of our fiercest disputes occur not because we’re doomed to be divided, but because the people involved simply aren’t thinking.

Most of us don’t want to think. Thinking is trouble. Thinking can force us out of familiar, comforting habits, and it can complicate our relationships with like-minded friends. Finally, thinking is slow, and that’s a problem when our habits of consuming information (mostly online) leave us lost in the spin cycle of social media, partisan bickering, and confirmation bias.

*Note: I received the book from Blogging for Books for free, and the links are non-affiliate. I also bought myself an ebook of this title. 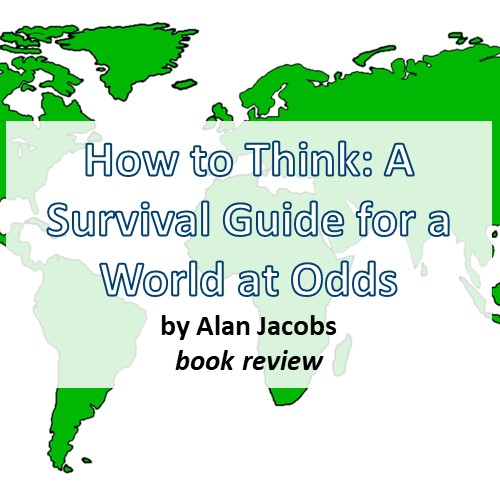